In honour of MLB 2012 Opening Series in Japan and the giant billboard in right field of the Tokyo Dome featuring Ichiro holding a Kirin Ichiban, I review the beer (though the version in North America is brewed in the USA). 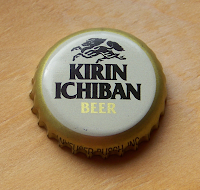 An Anheuser-Busch product, this Japanese beer is actually brewed in Los Angeles under the supervision of the Kirin Brewery from Japan and it tastes like a slightly more bitter than average lager, not much to distinguish it other than a stylish label and a great bottle cap.